What are Dedicated AWS EC2 Instances? 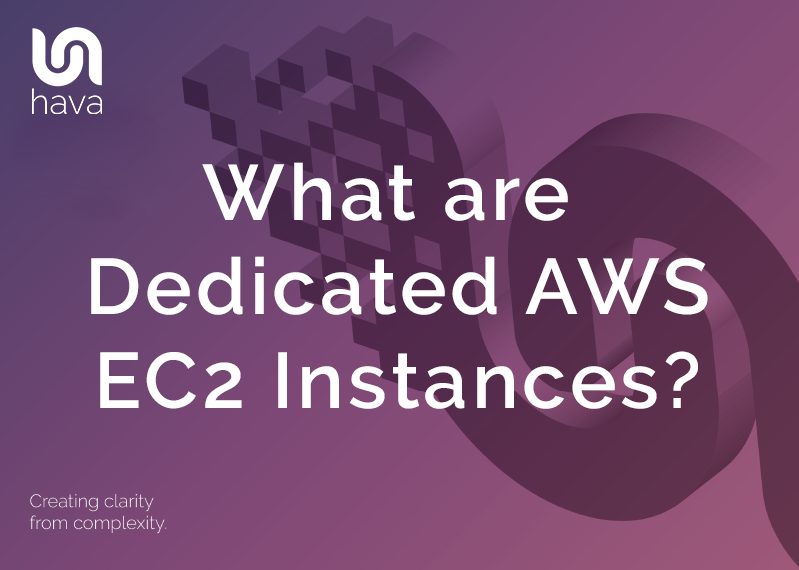 Ec2 instances are the virtual machines provided by AWS that you can rent to run your application workloads. They can can vary from powerful instances with hundreds of processors capable of processing vast amounts of data quickly, down to small micro instances suitable for running microservices.

They are in reality areas of a piece of physical hardware with the capability to support the compute and memory characteristics of the virtual machine EC2  instance being offered.

There are different classifications of EC2 instance types.

The M class for instance is a middle of the road instance type with an even proportion of compute, processor, memory and network throughput suitable for most business applications.

The physical hardware within the AWS data centres is built specifically for the different instance classes, so that when you select an EC2 instance type, the virtual machine provisioned will be allocated to a server with the appropriate resources. As they say, there is no cloud, only other people's computers.

So say you select an M4.xlarge instance type, there are a specific number of processors, a specific amount of network capacity and a specific amount of memory associated with the M4.xlarge instance type. AWS then provisions your virtual machine on an appropriate server and ensures that only you have access to the resources required by your instance on the server, even though there may be other AWS customer virtual machines on the same piece of multi-tenant equipment.

By default your EC2 instances will be provisioned on shared multi-tenant infrastructure. So other AWS customers will have their EC2 instances hosted on the same physical hardware that your virtual machines reside on.

When you select dedicated hosting, your EC2 instance will be the only virtual machine on the server hardware and all other instances will be prevented from running on that machine, this includes other EC2 instances you wish to run. This is the main reason dedicated infrastructure is much more expensive than shared hosting.

Each EC2 instance type typically has a number of options with various CPU, memory and storage options. The T3 EC2 type for example has the following options:

C6gn - ARM based AWS Graviton2 CPU with up to 100Gbps bandwidth

C5 - Choice of Intel Xeon scalable CPUs up to 3.9GHz

These memory optimized instances are designed to deliver fast performance for applications that process large data sets in memory.

HighMemory -  Intel Xeon CPU with up to 24TB Memory

Inf1 - Up to 16 AWS Inferentia Chips for ML inference applications

D3en - Up to 366TB of Hdd storage, Intel Xeon, up to 75Gbps network bandwidth

How does AWS assign hardware for EC2

Physical hardware in the AWS data centres are made available to provision EC2 instances when you select them in your AWS cloud console. AWS will then find available space on a server that has the physical hardware properties to meet the requirements of the type of EC2 instance you are installing.

A single server will typically host as many instances as it can without oversubscribing the amount of CPU or memory available to service the instances. These will usually be from multiple AWS accounts

For example 1 rack mounted server may have the capacity to host 3 x M4.xlarge 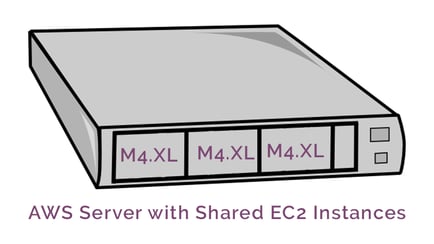 While simplified, the above image represents AWS deploying 3 M4.xlarge instances on a single physical server. As we can see from the available capacity, there are not enough resources left on the server to host a fourth M4.XL instance on this piece of equipment, but there is still some spare space.

Never one to let an opportunity slip, AWS will find a use for this spare capacity. While another M4 category EC2 instance will not fit, smaller instances like say a t2.micro will, so AWS will deploy whatever virtual machine will fit into the remaining space.

In reality multiple smaller images might occupy this remaining space alongside the M4.xlarge instances. 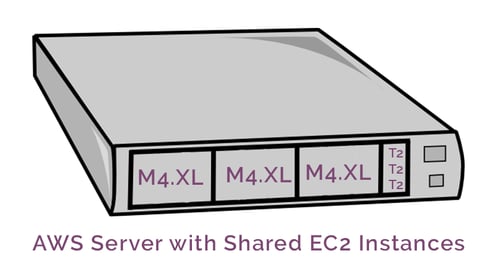 In reality the shared resources on this server aren’t strictly reserved exclusively for each instance. Sometimes you will be able to steal memory and CPU above and beyond what you have reserved using something called CPU credits and bursting.

When your instance is consuming less than you are paying for, AWS will issue you CPU credits. These credits are available for you to redeem during the times where your compute or memory requirements exceed what you have reserved.

In the above example if the M4 instances are not using their full allocation of CPU or memory and your t2.micro instance needs to temporarily exceed your allocated CPU or memory allocation to meet a spike in traffic or transaction processing, if you have CPU credits in hand, AWS will borrow some from the other instances on this server.

If you have no CPU credits or the other instances on the server are using their maximum allocation, then AWS will throttle the CPU, Memory and network traffic down to the maximum your EC2 instance should have access to.

In reality this system works well because the instances on a server will typically be running different applications and workloads and not all hammering the processors and available RAM on the server at the same time.

What happens when you select dedicated instances?

While bursting will still be possible if you accrue CPU credits, the entire server does not become available to service your dedicated EC2 Instance.

So it’s almost never a good idea to request that your EC2 instances be dedicated. While no one else can access the server your instance is running on, you don’t get exclusive use of the CPU and RAM on the server either, you will only get access to the maximum amount of CPU, memory and network bandwidth defined within your EC2 instance specifications.

So why would you use a dedicated instance?

In short, compliance is generally the only reason to choose a dedicated EC2 instance. In the USA if you are dealing with health care records you are governed by the HIPAA Act. The health insurance portability and accountability act was signed into law by congress in 1996 to protect sensitive patient health records.

Part of the compliance regime is that no other organisation should have access to the hardware your patient records are stored on. This was defined long before cloud computing but worked on the assumption that if you had digital access to hardware and you knew what you were doing, you could access any other information held on that hardware, even if it was in a different virtual network.

So what that means in cloud computing terms, is that if you are provisioning an EC2 instance that stores or enables access to patient information, then nobody else can have access to the hardware the EC2 instance lives on.

So in this situation a dedicated instance will be the only resource on the server, so no one else will be able to access your server and snoop about checking out your blood sugar levels.

When you need to run multiple EC2 instances on the same server, this service allocates a physical server for your exclusive use, as opposed to the standard multi tenant server methodology. Dedicated hosts provides the visibility and option to control how you place instances on a specific physical server and lets you use existing per socket/per core/per VM software licences like Windows Server, SQL server, linux which can help reduce costs if you already have licences in place.

Launching virtual machines on Dedicated hosts is managed through your AWS License Manager.

So that’s a quick run through AWS EC2 dedicated instances. Once you start to deploy EC2 instances using AWS, it’s invaluable to be able to visualize your infrastructure using easy to understand, accurate and perpetually self updating network topology diagrams that are automatically generated.

This is what hava.io was built for. You can get up to date interactive diagrams of your AWS, GCP and Microsoft Azure networks by connecting Hava and letting the magic happen.

You can take Hava for a free 14 day trial here:

Have you designed your AWS network for AZ failures