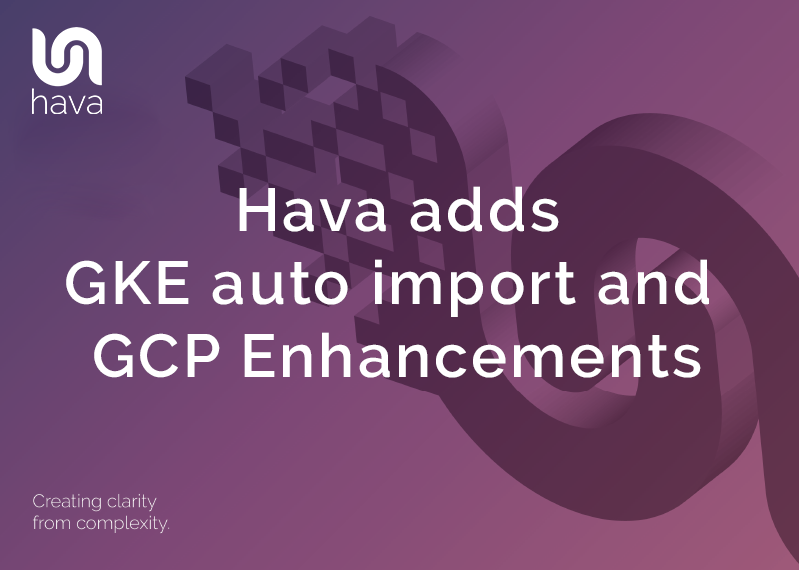 Soon, you will not have to do anything to invoke the import and diagramming of your GKE diagrams. If a GCP account you have already connected to Hava contains GKE workloads, the diagrams will appear automatically. While the feature is in limited release, please get in touch to get it switched on for your account.

Since the GKE workloads belong to a connected datasource, there is no way to delete or remove the GKE container view diagrams as they are treated as a sub-source or child entity of the main GCP account you have connected.

If you have GCP accounts that are exclusively running GKE workloads, you can now connect them to Hava to automatically visualise your GKE workloads. This will allow you to view the status of your clusters, nodes and pods to help visually identify potential problems.

As with all auto generated interactive Hava diagrams, when changes are detected a new diagram is created and the replaced diagram is moved to version history so you can still access it for comparison and audit purposes.

Along with the native GKE import a major tranche of GCP improvements have been released to increase the performance and utility of your GCP diagrams.

The first improvement is the re-engineering of the import function to make the process a lot faster. Other enhancements include:

If you haven't taken a look at your Hava GCP diagrams in a while, now would be a good time to revisit them and check out the changes.

A second tranche of GCP updates are due to be released shortly, these include:

Keep an eye out for announcements as these features are released.

If you are not using Hava to diagram your cloud environments ( gcp / azure/ aws ) or you have stand alone Kubernetes clusters, you can take a free trial at any time and connect your own data sources to see your environments in diagram form. Of course once you subscribe, you'll always have up to date diagrams on hand as well as an audit trail of changes so you can track back through changes for troubleshooting or audit purposes.

You can take Hava for a spin using the button below.